from the Friday, April 29 edition of the New York Times and Texas Tribune: 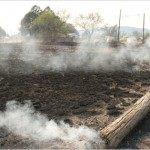 These are strange days in Texas. A severe drought gripping the entire state, unseasonably high temperatures, unusually low humidity and exceptionally gusty winds have created a perfect storm for wildfires, which have erupted statewide like never before. Horrible images of homes burned to the ground, property destroyed, and livestock, wildlife and human fatalities are impossible to escape.
The Texas Tribune

Unfortunately, the greatest chronicler of such dire conditions — the person everyone in Texas turned to for perspective — is no longer with us to make sense of it all. It’s fair to ask, rhetorically: What would Elmer Kelton say?

Mr. Kelton was the farm and ranch editor for The San Angelo Standard-Times from 1948 to 1963. He was also the longtime associate editor of Livestock Weekly and the author of several dozen western novels. His finest work, “The Time It Never Rained,” published in 1973, focused on the historic seven-year drought of the 1950s as told through Charlie Flagg, the hard-headed, independent-minded protagonist.

If anyone knew about drought, wildfires and making a living from running livestock on the range west of the 98th meridian, it was Mr. Kelton. Unfortunately, he passed away in 2009. But his son, Steve Kelton, is alive and well and living in San Angelo.

Steve Kelton, who now edits Livestock Weekly, remembers clearly that his father considered the period of time spent covering the 1950s drought for the San Angelo newspaper the most traumatic in his life. “I’d long since run out of new ways to say ‘dry,’ ” the father had told the son.

What would the elder Mr. Kelton write about today’s news? That there is an upside — a silver lining. “Dad was always a firm believer that nothing was black and white, nothing was all good or all bad,” Steve Kelton said.

“Fire can be good for brush control, if it’s a good, hot fire; these should be pretty effective in that regard,” he said in droll understatement, referring to the so-called Wildcat fires that have raged over 159,000 acres north of San Angelo in the west-central part of the state, threatening to engulf the towns of Robert Lee, Tennyson and Bronte.

Indeed, for all its obvious negatives, fire was part of the life cycle of the arid western range long before humans settled the region and tried to tame the land, instinctively suppressing wildfires whenever possible. Today, when conditions are right, many landowners intentionally burn their property because, as Steve Kelton noted, “it will improve things.”

He cited the destruction of nuisance species like prickly pear, mesquite and ashe juniper — a k a cedar — and brushy undercover that compete with native grasses. “There are a lot of caveats to that,” Mr. Kelton added. “You have to have rain, but if it comes all at once, you lose all the topsoil.”

But if the rain falls gradually, the first land that will green up and spring back to life is that which burned. “A really hot fire brings out woody vegetation that deer, birds, and even goats and sheep like to eat,” Mr. Kelton said. “Their seed needs fire to germinate.”

He made the same observation about the Texas rangeland that critics have made about forest management in the American West: the human tendency to suppress fire at first sight has created a buildup of dry tinder that makes any wildfire that manages to break out “bigger than they ought to be,” Mr. Kelton said. “But we also have the technology and the people on the ground to fight them, so we’ve got a trade-off.

“During the 1990s and the early 2000s, we went 13 years with a really severe drought out here,” he said. “Then it rained.” The country was left so depleted, he said, that there were no cattle or sheep left to eat the grasses that sprang up; so in 2006, the worst year for wildfires in Texas on record until this year, “when it burned, it burned extra hot.”

Despite the horrific loss of property, livestock and wildlife this year, the longer view finds something to look forward to in the wake of the destruction.

“This is survivor country,” Mr. Kelton said. “It puts on its best clothes when it rains after a long drought.”

Joe Nick Patoski is the author of “Generations on the Land: A Conservation Legacy” (Texas A&M Press).