On to Houston, and Miller Outdoor Amphitheater on June 2 for the Big Squeeze finals and the Texas Accordion Kings and Queens concert.

Here are the four finalists: 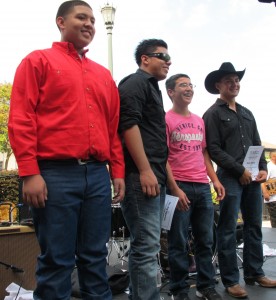 Austin, Texas – April 30, 2012 – There was a whole lot of squeezeboxing going on last Saturday on the Lone Star Plaza at the Bullock! There were over 700 music fans in attendance—the largest crowd on record for the semifinals contest—to cheer this year’s winners as they were selected. The Big Squeeze 2012 finalists are: Peter Anzaldua, 15, of Brownsville; Omar Garza, 17, of Mission; Luis Gonzales, 16, of Grand Prairie; and Michael Ramos, 16, of Dallas. These young musicians will perform at the Accordion Kings & Queens Festival in June when the 2012 Big Squeeze Champ will be crowned.

The Big Squeeze 2012 semifinals for up-and-coming musicians was held in Austin at The Bob Bullock Texas State History Museum on Saturday, April 28. This was the third consecutive year that The Big Squeeze contest has been held at the popular museum that tells “the story of Texas.” Semifinalists performed before a panel of judges and the public on the Lone Star Plaza in front of the museum, Saturday, April 28, from 2:00-5:30 p.m. A free concert was also held on the Plaza. Joe Nick Patoski emceed this year’s contest and performance. The program featured Joel Guzman, two-time Grammy Award winner and considered one of the best accordion players in the country; Ruben Paul Moreno, zydeco phenom who has just been nominated for the 2012 Zydeco Music Awards; and last year’s Big Squeeze Champ Ignacio “Nachito” Morales.

Each semifinalist played two songs and the esteemed judges chose the four finalists. The judges for this year’s contest included Debra Peters, Austin accordion player and teacher; Abel Barajas, accordion player for Ram Herrera; and Johnny Ramirez, 2008 Big Squeeze Champ. Finalists will be awarded $300 each as well as having their hotel stay paid in Houston to compete before the expected large, enthusiastic audience of accordion fans at the Accordion Kings & Queens Festival on June 2. At that time, The Big Squeeze 2012 Champion will be selected by the panel of judges with help from the audience. The grand-prize-winner will receive a prize package valued at $4500, including a $1000 cash prize, a brand new Hohner accordion and recording time at the historic Hacienda Records in Corpus Christi, as well as promotional support from SugarHill Recording Studios, Hohner, Inc., Hacienda Records and Texas Folklife, and other professional opportunities.

”The Big Squeeze has proven to be one of our most popular programs at Texas Folklife,” says Executive Director Cristina Ballí. “Audiences love to hear young talent from all over the state and they love to hear their stories. The participants and their families take a wonderful experience with them that they’ll never forget. We are grateful to The Bob Bullock Texas State History Museum for partnering with us again this year. We also deeply thank our incredible lineup—accordion legend and maestro Joel Guzman; Big Squeeze finalist from 2010 Ruben Paul Moreno, Reigning Big Squeeze Champ Nachito Morales—and, of course, the one and only Joe Nick Patoski. I’m also particularly grateful to our panel of judges who give so generously of their time and expertise.”

The Big Squeeze is supported by the members and Board of Texas Folklife, the City of Austin through the Cultural Arts Division, the City of Dallas Office of Cultural Affairs, the City of Houston through the Miller Theatre Advisory Board, the Houston Endowment, the Still Water Foundation, Texas Gas Service, and by a grant from the Texas Commission on the Arts. Additional support is provided by regional businesses including Hohner, Inc., SugarHill Recording Studios, Hacienda Records, FBA Design, Sign Effects and Embassy Suites Hotel in Downtown Austin.

Texas Folklife
Texas Folklife is a statewide non-profit organization dedicated to presenting and preserving the diverse cultures and living heritage of the Lone Star State. For more than 25 years, Texas Folklife has honored the authentic cultural traditions passed down within communities, explored their importance in contemporary society, and celebrated them by providing accessible and joyful arts experiences. It is located in Austin, Texas, in the SoCo neighborhood—one of the city’s vibrant commercial and arts districts.