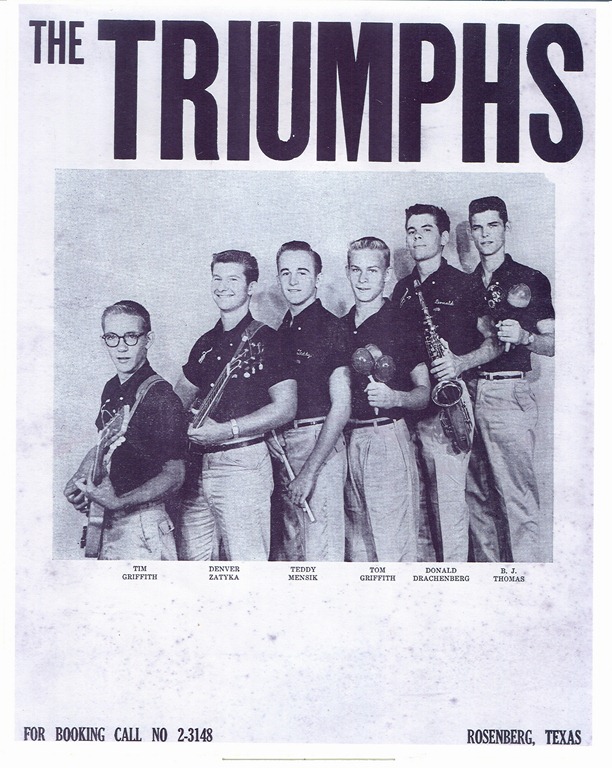 After 63 years, The Triumphs are finally hanging it up. This time they mean it. Sure, there have been “last shows” before, but this time, after a few more live dates between New Year’s Eve and February, that’s going to be it.

“We’re retiring. For real,” says Don Drachenberg, one of the band’s vocalists who also plays saxophone. At 82, he is one of two members, along with Gary Koeppen, remaining from the band’s glory days in the early to mid-1960s. (A third original member, Tim Griffith, sadly passed away earlier this month.)

During its heyday, the band packed dance halls between Houston and San Antonio, engaged in storied battle of the bands with Roy Head’s band The Traits, and scored a hit record with a cover of the mournful Hank Williams ballad “I’m So Lonesome I Could Cry,” sung by the group’s then lead vocalist, B.J. Thomas.

Formed in Rosenberg by Lamar Consolidated High School students, the band, named after the motorcycle, expanded over the years to include as many as seven to nine members. They first hung it up in 1980, but unable to quit the music, the group reformed in 1992. They called it quits a second time in 2020, with COVID-19 to blame.

“Our last performances were at East Bernard and Swiss Alp in January through February 2020, right before the pandemic hit,” Drachenberg says. “By the time May rolled around, all of our performing dates had been cancelled. By the middle of summer, we started yakking among ourselves. Live music and live dance halls may not be coming back for a few years. It looks like we’re done.”

That retirement lasted a year. A different tune was sung by the summer of 2021, when pandemic restrictions began to be lifted. “Three guys in the band started talking: we had a little gas left in the tank,” Drachenberg says. “A couple guys didn’t want to do it, seven of us did. We got back together in July to rehearse. In September, we started performing again.”

A year of gigs later and The Triumphs have reconsidered once again.

“We came to the conclusion we’re too old to be doing this. It’s too tiring, it’s too rough,” Drachenberg says, laughing. “You remember the good times, but you forget all the hours, lifting heavy equipment, all that. It was too much work and not enough fun.”

If ever there was a group who knew fun, it was The Triumphs. They built a following playing Top 40 and rock music in Texas dance halls between Houston and San Antonio. “East Bernard, Tate, Hilje, Hallettsville, Schulenberg, Moulton, LaGrange, El Campo KC Hall, Angleton Fairgrounds—we worked a circuit,” Drachenberg recalls. “We played those halls once a month, and worked in a party or a festival or reunion.”

Their repertoire included the popular songs of the day, from Motown and Jimmy Reed tunes to party songs like “Louie, Louie” and “(I’m A) Soul Man.” Very few original tunes were part of the setlist.

“My Girl,” made popular by the Temptations, remains one of the most requested songs at a Triumphs’ show. “Color My World” by Chicago became a band standard during the 1970s, as did “Midnight Hour,” “Red, Red Wine,” and “Cotton Eye Joe.” And, acknowledging the musical heritages of the dance halls where they played, the band performed polkas, including a medley of “Julida,” “Beer Barrel” (aka “Roll Out the Barrel”), “A Ja Sam,” and “In Heaven There Is No Beer.”

Two of their songs remain part of every Triumphs show today: their biggest hit, “I’m So Lonesome I Could Cry,” and “Garner State Park,” which still is the last song played at Saturday night dances on the patio of the pavilion at Garner State Park north of Uvalde.

During the early 1960s, the Triumphs tried their hand at recording and realized some success, thanks to Houston Top 40 radio stations. Their first two 45 rpm singles, “I Know It’s Wrong” and “Lazy Man,” received airplay in 1962 on both KILT and KNUZ, with “Lazy Man” reaching No. 7 on KILT’s chart. Other hits included “I’ve Got a Feeling,” “Billy and Sue” (reached No. 1 on KILT in 1964), and “Garner State Park.”

Then in December 1965, the band’s remake of Hank Williams’ “I’m So Lonesome I Could Cry” broke out of Houston and went No. 1 nationally. Acknowledging the lead singer’s distinctive tenor voice, the band was promoted as B.J. Thomas and the Triumphs.

Things took a turn in March 1966 when the group was offered a slot on a national tour. Thomas eagerly signed on, but the rest of The Triumphs stayed behind. “Most of us were in college,” Drachenberg says. “We didn’t want to go. B.J. did. None of us had the aspirations he had.”

It’s a familiar showbiz story, only in this version the band that stayed behind never quit. “We’ve always been a local band,” Drachenberg explains. “We just wanted to enjoy what we do, and have our friends around us…We have so many fans that come out to see us. If we put something out on Facebook that we’re going to do something, we know several hundred people are going to turn out at that event. We recognize the faces, recognize the couples, even as they’ve gotten older. We have a hellacious fan base.”

Over the years, the band’s popularity could be seen at venues like Riverside Hall in East Bernard, which drew fans from Columbus, Eagle Lake, Bay City, Houston. The group was so popular there, Drachenberg says, “[w]hen it burned down in the late 1980s, they immediately built another hall.”

In 2010, 44 years after he left for biggest stages, Thomas performed with the Triumphs again. “Both of us were kicking ourselves for not having got back together earlier,” Drachenberg says. They continued doing special performances together until Thomas’ death in 2021.

Drachenberg admits he’s going to miss doing what he’s done his entire adult life. “Performing on the stage, you get a great feeling,” he says. “Having somebody applaud or go ‘Whoop!’ after you’ve done a song, that gives me chill bumps.”

And after the band gave so many people a good time with music, the fans are returning the favor. “People have been calling me, thanking me for giving their family so much fun and pleasure over the years,” Drachenberg says. “That feels really good.”

The Triumphs’ final public shows take place New Year’s Eve at the Silos in Giddings, Jan. 28 at the band’s historic home base Riverside Hall in East Bernard, and Feb. 18 at Swiss Alp Hall. For more information, check the calendar on The Triumphs’ website.