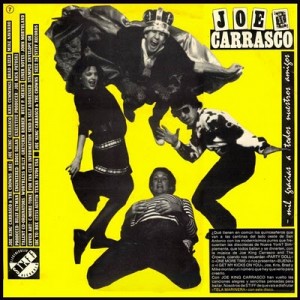 Here’s the story:
In the late summer 1979, Joe “King” Carrasco formed a stripped-down four-piece combo to replace his Chicano big band, El Molino. Dubbed the Crowns, organist/accordionist Kris Cummings, bassist Brad Kizer, and drummer Miguel Navarro backed up Carrasco at Raul’s, the famed punk club, and the Hole-in-the-Wall, and other University of Texas-area venues in Austin, quickly gaining a following around their revved-up Tex-Mex brand of punk rock, harkening back to the classic Vox and Farfisa organ-driven sound first popularized by the 1960s Texas bands Sir Douglas Quintet (“She’s About A Mover”), Sam The Sham and The Pharoahs (“Wooly Bully”), and ? And the Mysterians (“96 Tears”).

In November 1979, Joe “King” Carrasco & the Crowns made their first trip to New York City where Joe “King” almost gave the Lone Star Café’s owner, Mort Cooperman, a heart attack when he jumped off the club’s balcony onto the stage. The band was such a sensation, they were invited to play the storied Mudd Club downtown, and returned to Austin with critical praise from New York’s music press including Lester Bangs and John Rockwell of the New York TImes.

Armed with a 45 rpm single “Party Weekend” b/w “Houston El Mover” that was financed by ZZ Top’s Billy Gibbons, the band returned to New York in the spring of 1980 to record a demo album for Warner Brothers Records, which was eventually released on ROIR records as “Tales From the Crypt,” and platy two weeks worth of dates at CBGB’s, Hurrah, TR3, which would lead to more bookings at the Danceteria, the Peppermint Lounge, and the Bottom Line, as well as appearances in Washington, DC, Boston, Toronto, Providence, and other cities in the northeast.

By the end of the summer, Joe “King” Carrasco & the Crowns signed a recording contract with Stiff Records in England and embarked on the Son of Stiff Tour with Tenpole Tudor, Dirty Looks, the Equators, and Any Trouble, an extended three-month tour of the United Kingdom, Europe, and the northeastern United States, promoting their debut album and the single “Buena,” a Top Ten hit in France and Sweden that charted in the Top 40 on the BBC.

While overseas, the band filmed a video of “Buena” in London, and taped television appearances in Spain, France, and on Musicladen in Germany, which was broadcast across the Continent.

In January, 1981, the band issued their first US album on the Hannibal label for music empresario Joe Boyd and appeared on the television series “Saturday Night Live” and was a featured act on a new cable television channel called MTV. Later that year, JKC and the Crowns made their West Coast debut at the Whiskey-A-Go-Go behind their Hannibal EP “Party Safari” and played a date in the basement of Hollywood’s Cathay de Grande where they shared the bill with Top Jimmy & The Rhythm Pigs and Los Lobos, making their West LA debut.

Joe “King” Carrasco & The Crowns played a critical role in exporting the Austin sound and Texas music around the world, while establishing the band as one of the most popular music-makers in the Lone Star state in clubs, at Spring Break in South Padre Island, and in arenas and outdoor venues such as Red Rocks, the Frank Erwin Center, the Summit, the Ritz, and Southpark Meadows where they shared the bill with the Talking Heads, the Police, REMm UB 40, the English Beat, the Go-Gos, George Thorogood, and Culture Club.

Thirty years later, the band that exported Tex-Mex Rock-Roll around the globe has reunited for a limited number of Texas dates, demonstrating to fans that what they had heard all those years ago was no mirage: Joe “King” Carrasco & the Crowns rock like no one else before or since.