My story on Conjunto music in Texas Coop Power magazine

Soul Music of South Texas
Conjunto, built upon a polka rhythm, turns accordions and 12-string guitars into a unique sound and subculture 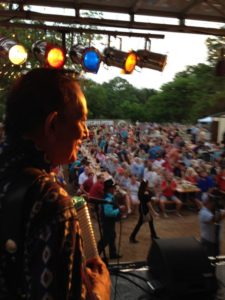 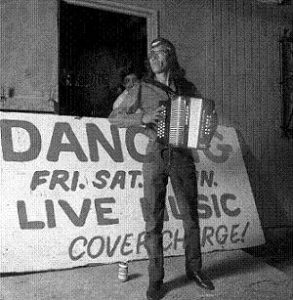 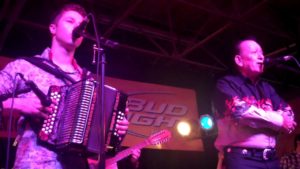 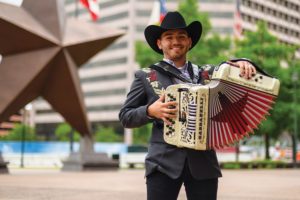 Eduardo Garza of Mission was one of the big winners at the 2019 Big Squeeze youth accordion competition.
IMAGE: Courtesy Texas Folklife 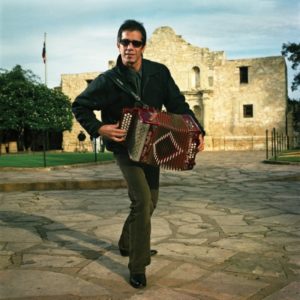 Joel Guzmán at the Alamo. 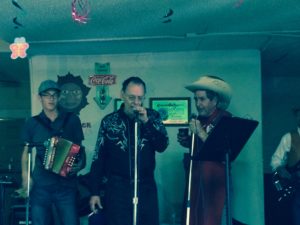 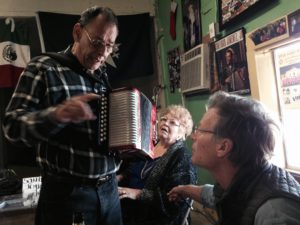 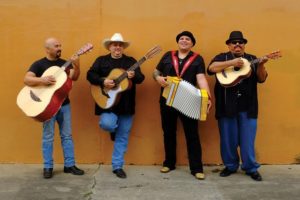 Los Texmaniacs have taken conjunto as far as China. 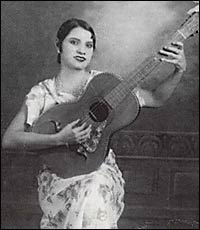 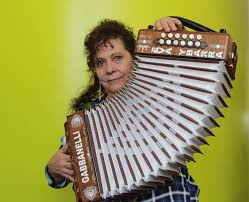 San Antonio’s Eva Ybarra is known as the Queen of the Accordion. 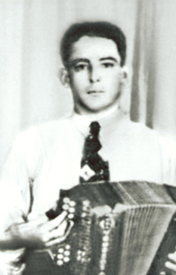 Narciso Martínez was one of the recording pioneers of conjunto.

Darren David Prieto played the accordion in Carnitas Uruapan, a meat market on the west side of San Antonio, one Sunday morning in 2016 while customers lined up for tamales and carnitas. Back then, the market hosted a weekly residency with accordionist Santiago Jiménez Jr., younger brother of accordion legend Flaco Jiménez. The gig was practice for Jiménez, but for Prieto, it was an apprenticeship and a steppingstone to a career performing the soul music of South Texas.

Jiménez introduced the shy teenager from New Braunfels, then 16, as “mi protegido”—his protégé—and, blushing, Prieto nodded toward Jiménez and added, “Mi profesor.” This unlikely venue and early start time was a very big deal for the slight, quiet young man because as part of a new generation of conjunto accordionists, it was his opportunity to learn from a master.

As Jiménez played his diatonic button accordion, accompanied by a sideman strumming chords on a 12-string guitar called a bajo sexto, pounding out a rhythm to propel the sounds from Jiménez’s accordion, the meat market’s owner occasionally walked out from behind the counter to harmonize with Jiménez in vocal duets. “Margarita, Margarita,” they crooned, faces inches from each other. Sit-ins from the neighborhood were part of the weekly routine. Grammy Award winner Max Baca of Los Texmaniacs walked into Carnitas wearing a football jersey and shorts rather than his western stage outfit and sat in with the band, playing bajo sexto.

Conjunto’s bouncy rhythm, typically a polka, is why it is also known as música alegre, happy music. Like blues and country, conjunto—pronounced cohn-hoon-toe—is indigenous, only regionally specific to South Texas, with mostly Spanish lyrics. In South Texas, and anywhere conjunto’s influence extends, the term is applied to both sound and subculture.

Conjunto has two key instruments: the diatonic button accordion, which, like a harmonica, changes notes as air is pushed or pulled past vibrating reeds, and the bajo sexto, which provides the rhythm and backbeat. Most modern conjuntos also include drums, guitar and bass.

At a time when most American roots music’s popularity is on the downswing, conjunto’s roots are spreading. Public school programs in La Joya, Los Fresnos, Brownsville and other towns across the Rio Grande Valley have added conjunto to their curricula, and bajo sexto classes are taught weekly at the Conjunto Heritage Taller and the Guadalupe Cultural Arts Center in San Antonio. “We get them from 8 to 80,” said Rodolfo Lopez, Conjunto Heritage Taller director. “Conjunto is us, la gente. This is a unique music form.” Kids from the taller (workshop) have dominated the state-wide Big Squeeze youth accordion competition sponsored by Texas Folklife since its inception in 2007.

Conjunto was born in the late 19th century when German immigrants introduced the button accordion to South Texas. In part because of its rural roots, it was known as cantina music. Conjunto made its commercial debut in the 1920s and ’30s, when Columbia and Bluebird joined other labels in the fledgling recording business, setting up studios in rooms at San Antonio’s Gunter and Bluebonnet hotels as well as at local WOAI radio to record musicians solicited by talent scouts. Conjunto accordionists were recruited to San Antonio alongside bluesman Robert Johnson, western swingsters Bill Boyd & His Cowboy Ramblers and the Tex-Czech sounds of Adolph Hofner as well as Texan Mexican singer Lydia Mendoza.

The instrumentals by those conjunto accordionists sounded Mexican with additional Bohemian, Czech and German elements, reflecting the influence of the immigrant communities of South Texas.

Texas conjunto recording pioneers Bruno Villarreal from Santa Rosa, Narciso Martínez of La Paloma and Santiago Jiménez of San Antonio all eavesdropped on Czech, German and Polish dances in South Texas and incorporated what they heard into their own music.

Conjunto follows neither mariachi nor ranchera traditions, nor is it norteño, the accordion style popular in northern Mexico. “It’s a melding of European music and the Mexican bajo sexto,” Rodolfo Lopez explained, noting that Czech redowas, Bohemian schottisches, waltzes and polkas all came from Europe. “We just added our jalapeño chiltepin flavor to it.”

Flaco Jiménez, the older of conjunto pioneer Santiago Jiménez’s two sons, expanded awareness of the genre in 1973, appearing on the album Doug Sahm and Band, featuring the rock musician from San Antonio and an all-star lineup that included Bob Dylan. Sahm sought out and played bajo sexto with Flaco Jiménez in his backyard on San Antonio’s west side. “He could groove,” Jiménez said.

Esteban “Steve” Jordan of Elsa, a dashing figure with an eyepatch known as the Jimi Hendrix of the accordion, also worked as a conjunto innovator. One record label described Jordan’s style as acordeón psicodélico. If Jiménez was the standard-bearer, Jordan was the experimentalist—always pushing the envelope until his passing in 2010.

Another notable exporter of conjunto accordion is Joel Guzmán of Buda, who performs with his wife, Sarah Fox, as Aztex; plays and records with country rocker Joe Ely; and joined Paul Simon on his Homeward Bound tour. One of few professional female accordionists, Eva Ybarra earned a National Heritage Fellowship from the National Endowment for the Arts in 2017.

Conjunto is no longer exclusively a Texas thing. Japan has several conjuntos who were inspired by Flaco Jiménez’s appearance in their country with the Texas Tornados. Dwayne Verheyden from the Netherlands mastered Jiménez’s playing style, then mastered Spanish to better communicate with Jiménez and conjunto audiences. After his performance at the Tejano Conjunto Fest in San Antonio in 2014, fans patiently lined up to have their picture taken with him, as if he was the Justin Bieber of conjunto.

Darren Prieto is part of the next wave.

Typical of most Texas kids, he grew up listening to rock, country, jazz and hip-hop. Not typical of most Texas kids, he chose to play accordion when he was 14. “I was always with my grandfather,” he explained. “Around our house, conjunto music was always on. I listened to all types of conjunto, from Los Pavo Reales to Ruben Naranjo.” The summer before he entered high school, Prieto picked up his grandfather’s accordion, just as his own father once had. By that September, he’d learned some polkas. “I started falling in love,” Prieto said.

Web Extra: Where To See and Hear Conjunto

Texas Folklife presents Big Squeeze competitions in the spring. The Museum of South Texas History in Edinburg hosts the semifinals, and the finals are staged at the Bullock Texas State History Museum in Austin. Big Squeeze champions all perform at the Texas Accordion Kings and Queens concert and dance at the Miller Outdoor Theatre in Houston the first Saturday in June.

The Tejano Conjunto Festival in San Antonio, sponsored by the Guadalupe Cultural Arts Center, is conjunto’s biggest bash of all, staged at Guadalupe Theater and in Rosedale Park May 13–17.

Rancho Alegre Conjunto Music Festival in May in Austin, plus weekly tardeadas in the spring and fall.

Two documentaries tell the story of conjunto: 1976’s Chulas Fronteras, by filmmakers Les Blank and Maureen Gosling, and Songs of the Homeland, filmed in 1995 by Hector Galán.

Conjunto Musicians, Their Lives and Their Times is an audio program in the Onda Latina Collection at the University of Texas featuring Esteban Jordan, Flaco Jiménez, Santiago Jiménez Jr. and Tony de la Rosa.

The Texas Conjunto Music Hall of Fame and Museum in San Benito is one of the cradles of conjunto. It’s open Thursday–Saturday at 210 E. Heywood St. Call (956) 245-1666 for more info.

Del Bravo Record Shop, run by the family of conjunto composer Salomé Gutierrez, is as much a museum as a record shop. Don’t miss the Lydia Mendoza tribute display, which includes one of her stage dresses. It’s at 554 Old Highway 90 in San Antonio. Call (210) 432-8351 for more info.

Those Sunday morning performances on the small stage at Carnitas Uruapan, where he learned from Santiago Jiménez Jr., stoked Prieto’s creative fire. “He helped me learn to get over stage fright, how to talk to the crowd and even how to be a humble musician,” Prieto said.

The gigs at Carnitas Uruapan stopped in 2018 when the owner retired. But Prieto remains tight with Jiménez. “You can hear a little bit of Santiago Jiménez Jr.’s style in my own playing,” Prieto said. “Playing conjunto music is so fun. It isn’t like any other music. It has that beat that makes you want to dance. It makes you feel alive.”

Writer Joe Nick Patoski, a self-confessed conjunto addict, offers this playlist of some of his favorite conjunto songs and artists. He has been writing about conjunto music since 1975 for Texas Monthly, Oxford American, Rolling Stone, Country Music and other publications. He hosts the Texas Music Hour of Power, 7–9 p.m. Saturdays on Marfa Public Radio and Wimberley Valley Radio.

Writer Joe Nick Patoski, a confessed conjunto addict, lives outside Wimberley and is a member of Pedernales EC.

This appeared in the March 2020 issue