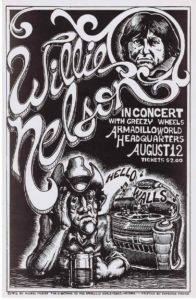 Longtime Austin journalist and author Joe Nick Patoski recently launched his much-anticipated book “Austin to ATX,” a history about the waves of outsiders who have transformed our city, mostly since the 1960s.

Along with the hippies, musicians and activists widely associated with what Patoski calls the “Other Texas,” he nimbly links together those familiar tribes with other networks of writers, movie-makers, tech geeks and food innovators who make up Austin’s vaunted creative class.

“Their cumulative vision of Austin represented the Other Texas that was progressive, forward-thinking, innovative and environmentally aware,” Patoski writes, “with an abundant population of smart, creative minds, built on a tradition of tolerance and openness to new ideas and new people, and a strong attachment to place.”

Along with chapters about each identified group, Patoski provides thorough histories of South by Southwest, “Austin City Limits” and other cultural brand names.

One of the things that sets this history apart from standard Austin nostalgia, however, is that Patoski does not judge. Not newcomers, not even tourists, whom he calls the “Looky-Loos.”

“It would have been very easy to take the ‘Old Fart/Austin Was Better Way Back When’ approach,” says Patoski, who recently drew a lively crowd of 250 to the Austin Central Library for an Austin Public Library Foundation book party. “Because no matter when you arrived, you likely think it was better then, and in many respects it was — because it was all new to you. The fact that good people continue pouring in, despite money becoming a thing, and despite some new arrivals coming here for jobs, not the lifestyle, was not lost on me.”

Patoski moved to Austin in 1973 — he has lived in Wimberley since the 1990s — so his view is long. All along, he keenly observed the connections within the Austin experience going back far before his arrival.

“Back in the ’70s, I rented an $85-a-month hovel in Swede Hill in East Austin from Annie Stasswender,” he says. “Her family had the headstone business adjacent to Oakwood Cemetery. Two or three times a week, Annie, who was in her 80s, would drive over to Scholz Garten, where she was a member of the Saengerrunde, and would enjoy her German soda pop, as Statesman columnist Nat Henderson used to describe beer. That ritual was her lifeblood.”

That dovetailed with Patoski’s childhood memories of Austin.

“When my father and stepmother took my sister and I on family vacations to South Padre Island, back when there were two motels, a gas station and two restaurants on the island, they would always stop at Scholz to enjoy a schooner of beer, and sneak sips to my sister and me,” he says. “That scene of sprawling oak trees strung with lights and these long tables filled with people drinking beer, laughing and enjoying conversation stuck with me.”

Trying to figure out what is this elusive mojo that Austin has, he kept flashing back to Scholz.

“Of course! Our oldest business is about singing, dancing and drinking beer,” Patoski says. “This refined pursuit of pleasure is baked into the city’s DNA. I arrived in 1973 and it wasn’t but a week or two being here when someone said, ‘You should have been here two years ago.’ And over the years, I have concluded Austin in the ’60s was pretty cool, but Austin in the ’30s, when (writers J. Frank) Dobie, (Roy) Bedichek and (Walter Prescott) Webb had Barton Springs practically to themselves while they philosophized in their bathing trucks, must have been some kind of paradise.”

In Patoski’s version of the story, the University of Texas and state government attracted folks that “needed work but still wanted plenty of leisure time for beer-drinking, bullshitting, hell-raising and thinking.”

Austin was also the only place in Texas during the 1960s where hippies were relatively safe from violent suppression. Patoski goes into great detail about how the countercultural crowd coalesced, how early on many of them left for greener pastures in San Francisco, then how that out-migration became an in-migration because of music, specifically a form that combined traditional country music with rock ‘n’ roll in venues like the Armadillo World Headquarters with musicians such as Willie Nelson at the head of the parade.

“Throughout the ’70s, musicians poured into the city, especially once Willie became a one-name superstar,” Patoski says. “By the end of the ’70s, with the addition of venues like Antone’s and Liberty Lunch, all kinds of musical tribes had formed in Austin. No matter what kind of music interested you, there was a community of that music in Austin. The pickers started the whole migration, which has never stopped. Following music came film and food communities, and it continued building up until high tech kind of took over the culture in the ’90s. Still, music remained this underpinning that informed all these fields.”

Two of the best chapters — ones on literary Austin and culinary Austin — are organized around one or two special interviews each.

“The literary chapter was the most surprising to me,” Patoski says. “I’d kind of dismissed the idea of a writing community. But I always loved the stories (author) Steve Harrigan used to tell in his self-deprecating way when we were both at Texas Monthly. I really identified with his tales about mowing lawns to get by so he could write. I love the Zen of lawn-mowing and do a lot of my deep thinking while cutting grass. So Steve graciously sat down and told me his story, which led me down all kinds of rabbit holes to writers before him, and how Texas Monthly played a role in cultivating a real literary community.”

“I shopped the original Whole Foods on 10th and Lamar — and its predecessor SaferWay, and Good Food Store, which provided the blueprint,” he says. “I’d interviewed John Mackey for Texas Monthly just as (Whole Foods Market) had started expanding to Houston, New Orleans and Dallas. But I also knew Patty Lang Fair, who managed the original store and stuck with the company until the Amazon sale. She told me stories that Mackey, as corporate CEO, could not.”

Patoski, a longtime barbecue connoisseur, had helped hatch the idea of a Texas Monthly top 50 barbecue joints list with Pat Sharpe. So a focus on Aaron Franklin seemed natural.

“I’d met Aaron when he was working for John Mueller, who brought Central Texas-style ‘cue to the city,” he says. “I was an early regular at Aaron’s trailer and was drawn to his storytelling as much as his brisket. Aaron is the same cat I met ‘way back when.’ It is telling that he didn’t come to Austin to do barbecue. He came to Austin to play in bands. These were easy choices to tell these stories.”

Patoski writes accurately that Whole Foods was a “cool hang.”

“The cool hang is part of the secret sauce,” Patoski says. “People do things in Austin because it’s cool and fun. All these origin stories are rooted in what I call the alternative Austin business model, doing things for all the ‘wrong’ — but really right — reasons. ‘Hey, let’s get together to build a concert hall’ was the motivation behind the Armadillo World Headquarters. There was no business plan.”

Patoski does a good job of including the tech talent and game-makers among the outsiders who molded today’s Austin economy. Yet the great wealth they produced also completely transformed real estate, philanthropy and retail.

Can the Old Austin of those who are still trying to eke out the low-cost lifestyles that attracted them here live alongside the New Austin of towers, traffic congestion, outrageous rents and high-price restaurants?

“I continue to grapple with the idea that Austin’s success and the wealth being generated here are marginalizing creatives, who are moving to the suburbs along with police officers, firefighters and teachers because they can no longer afford to live in Austin,” Patoski says. “You can’t really create and slack like you used to. You have to bring your own money or have an entrepreneurial streak to be able to afford to live here now. The response of organizations like HAAM, SIMS and Black Fret are trying to address that, but I think the next 20 years will tell the tale whether or not we killed the goose that laid the golden egg.”

One of Patoski’s most generous observations involves the context in which newcomers have perceived the Broken Spoke.

“If you were here in 1973, when the Broken Spoke marked the southern limits of South Austin, you probably have a difficult time reconciling all the condos surrounding it,” he says. “But if you just arrived and are tooling down South Lamar and all of a sudden you see this genuine honky-tonk among this strip of condos, you probably think, ‘How cool is this? A honky-tonk in the middle of all these low-rise living spaces.’ And Barton Springs! A spring-fed pool within eyeshot of downtown skyscrapers. OK, I don’t like to pay for parking, or waiting in line, like you have to do to go to Barton’s, but those springs are still those springs. It’s all about perspective. And my sense is, new arrivals are just as dazzled as I once was. That ‘cool factor’ — whatever it is — remains.”

See the Forest of Cooperation for the Trees