Linking History and Fortunes of a City and a Team
By CHRISTOPHER KELLY
Published: October 13, 2012 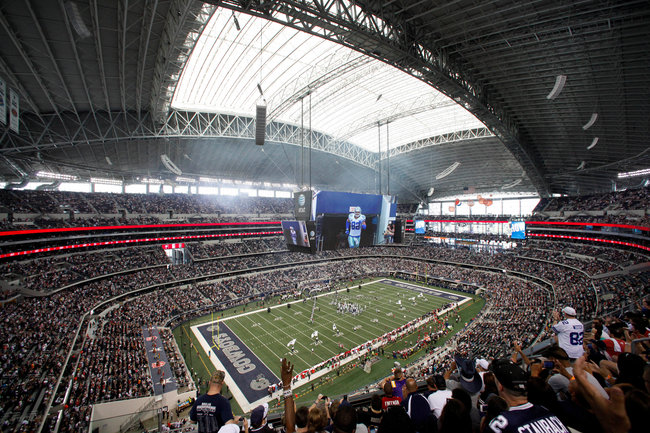 The rapid-fire, ultra-glitzy, superstar-driven nature of professional football as it is played on any given Sunday does not always lend itself to serious literary contemplation. For every nonfiction classic like George Plimpton’s “Paper Lion” or Michael MacCambridge’s “America’s Game,” the shelves are cluttered with dozens of adoring biographies, glossy chapbooks and quickie novelty items like “100 Things Steelers Fans Should Know & Do Before They Die.”
Enlarge This Image
Tim Sharp/Associated Press

Joe Nick Patoski’s book reaches back to the mid-20th century, when the groundwork for the Dallas Cowboys franchise was laid, and beyond.

Which makes the arrival of Joe Nick Patoski’s new book, “The Dallas Cowboys: The Outrageous History of the Biggest, Loudest, Most Hated, Best Loved Football Team in America” decidedly unexpected. A doorstop-size 800-plus pages, the book is less a sports story than a mixture of history and cultural analysis. In Mr. Patoski’s interpretation, the city and the sports franchise are inextricable; each allowed the other to grow and capture the national consciousness.

“Growing up in Fort Worth, you experience that second-city syndrome, that no matter how good your city is, what is going on in Dallas is shinier and better,” said Mr. Patoski, who now lives near Wimberley. “That question has been there throughout my life. What’s the deal with Dallas?”

“The Dallas Cowboys,” which was published by Little, Brown and Company last week, reaches back to 1841, when John Neely Bryan founded Dallas. It then fast-forwards to the mid-20th century when the oil scions Clint Murchison Jr. and Lamar Hunt laid the groundwork for the football franchise. Mr. Patoski creates a vivid portrait of that era in Dallas, a city where “success seemed to be a matter of simply wanting it badly enough and being willing to work hard enough to get it.” (A second newly published book about the Cowboys, “Ten-Gallon War: The N.F.L.’s Cowboys, the A.F.L.’s Texans and the Feud for Dallas’s Pro Football Future,” by the sportswriter John Eisenberg, takes a similar, if narrower look at the team’s earliest years.)

Mr. Patoski, a former Texas Monthly staff writer best known for biographies of musicians like Stevie Ray Vaughan and Selena, had almost no previous experience writing about sports. He first began working on the Dallas book in 2009, after “Willie Nelson: An Epic Life” was published. Though he planned to compose a book of historical record, the sports franchise greeted his Cowboys project with a fair measure of indifference. Mr. Patoski’s multiple requests to interview Jerry Jones, the Cowboys owner, were never answered, and the author said he was denied a press pass to cover the 2011-12 season because the Cowboys media office determined he was not “working press.”

The franchise, which was first established in 1960 as part of the National Football League, did give him access to historical scrapbooks at the team’s headquarters in Valley Ranch, documents he pored over and supplemented with the day-to-day newspaper coverage of the team.

As thoughtful and well researched as “The Dallas Cowboys” is, one question remains unanswered: does the mythology of “America’s team” still resonate 16 years after the Cowboys won their last Super Bowl?

According to John Parsley, who acquired and edited the book for Little, Brown, the publisher thought an audience would be drawn to this ambitious project.

“Every team is buffeted by its great glories,” Mr. Parsley said in an e-mail. “If a team is thriving, it’s said to be returning to greatness, and if it’s struggling, nostalgia can bring about the joy a fan clings to. But some teams are so integral to a sport, to the way it’s viewed and celebrated and even played, that their full history is always fascinating.”

Although books like Mr. Patoski’s and Mr. Eisenberg’s are being published, and the television networks continue to see big ratings for Cowboys games, some long-term observers wonder if the franchise is simply running on the fumes of nostalgia.

“It continues to be an ‘Emperor’s New Clothes’ narrative,” said Bob Sturm, one of the hosts of The “Bad Radio” show on 1310 AM, Dallas’s sports talk radio station. Mr. Sturm added: “It’s really a great study on the optimism of fans and media alike about certain brands. The Cowboys enjoy this brand name benefit of the doubt.”

Mr. Patoski sees the issue in even grander terms. He thinks both the city of Dallas and the football team are at a crossroads, poised to do great things, but perhaps paralyzed by trying to live up to past glories. What cannot be denied, he says, is that both Dallas and its Cowboys still know how to think big. Consider the new Cowboys Stadium, which opened in Arlington in 2010, at a reported price north of $1 billion. “It may be the last big gasp of Dallas’s ‘ours is bigger’ syndrome,” Mr. Patoski said. “That’s Jerry Jones’s brilliance. He’s kept the Cowboys part of the conversation.”

For stories, reviews, news and more, go to: texasmonthly.com.
The Texas Tribune

Expanded coverage of Texas is produced by The Texas Tribune, a nonprofit news organization. To join the conversation about this article, go to texastribune.org.
Follow @NYTNational for breaking news and headlines.
Cowboys Stadium in Arlington, Tex.